Last year I entered an Ex-Libris (book plate) competition in Lithuania for Trakai Peninsula Castle, which was based on unicorns so I couldn't resist!

Back in 1962 a unicorn artefact thought to be from the 14th Century, was unearthed by archaeologists in the grounds of the caste, and has since been adopted as a symbol of the castle, and so became the subjct for this competition.

I posted off my entry to Lithuania some months ago, and I had no idea if it had arrived until I got an email in February with a copy of the catalogue that included my image. I think it was included in an exhibition in the castle but difficult to tell...

The main gist of the competition was to use the symbol of the unicorn and include the words 'Ex-Libris' and also who t was dedicated to (I chose the castle itself). My unicorn is based on the Lithuanian heavy draft horse. I did originally also have a picture of the castle in, but it it didn't work in the design so I removed it. Ex-libris are traditionally done using printmaking methods, but CGD (computer generated design) was included in this competition, although mine is originally hand drawn, the design is put together using a computer.

I have also included a design for another Ex-libris I entered, for which I was not successful, but I enjoyed making it so I thought it was worth putting up. This time it is an English shire horse with its decorations, and the 'flights' in its mane spelling out 'Ex-libris', as this time it was dedicated to me and I love shire horses! 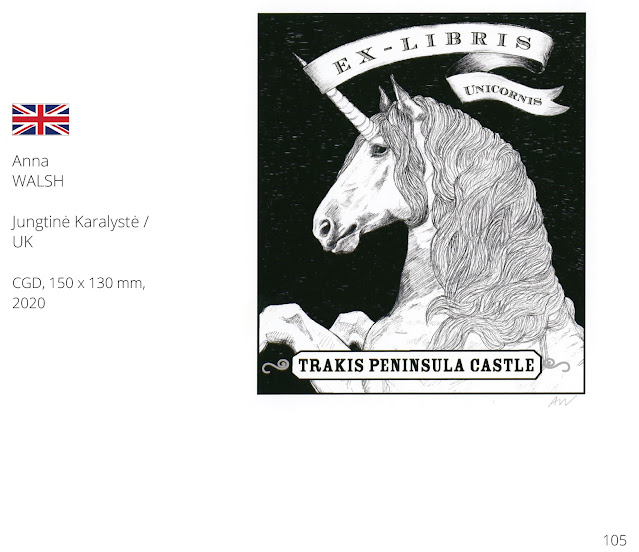 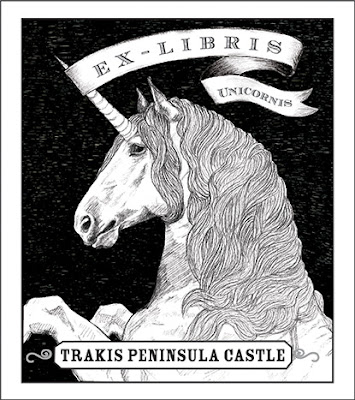 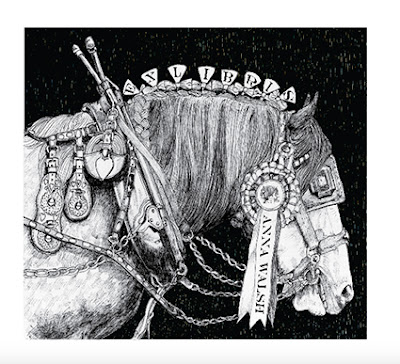 Animal Board games and Class of 2020 exhibition

Some other work I had been working on last year (2020) is a series of prints based on Victorian board games. I had recently come across The Swan of Elegance and other beautifully illustrated games, and the mix of the illustrations and the social messages I found eccentric and unique, and I started forming ideas as to how I could use them.
When the pandemic hit, lots of stories about animals and wildlife taking over areas usually busy with humans began to appear, along with commentary on social media as to whether many of them were true or not, and if it mattered. 'Emissaries of Hope and Possibility' is the result of the research I made into these stories . The images in the ovals, which make up the route for the game, depict various stories that appeared on social media and the news, fake and real, of wildlife taking over during the pandemic in areas usually full of humans.Many turned out to be fake and were debunked, my favourite being that lions has been deployed on the streets of Russia by Putin to keep people in check!
The title comes from a New York Times article about re-wilding our cities on social media. There were also several articles doing the rounds about whether many of these stories were fake or real, and if it mattered. They were spreading feelings of hope during a desperate time, and many gave glimpses of what a post - covid world could look like if we took the lessons on board. 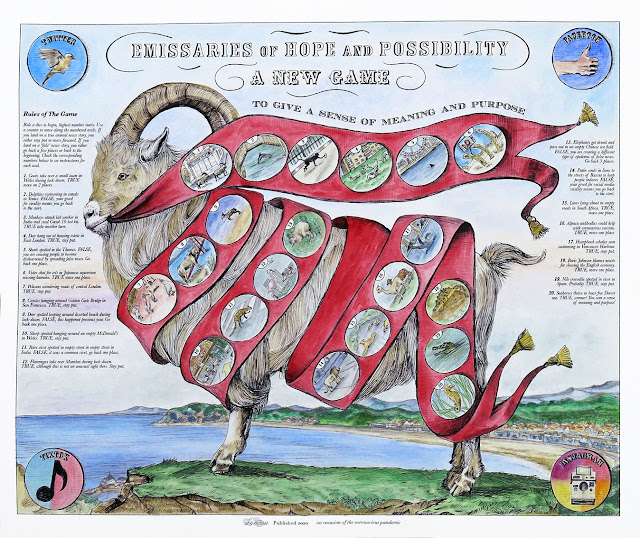 Emissaries of Hope and Possibility, hand coloured digital print 42 x 50 cms
Reading about the coronavirus and the potential for 'mindboggling numbers of viruses' to appear if we carry along the path we are on, abusing nature and the planet, I found deeply disturbing.
Zoonotic viral spillover is the transmission of a pathogen from a vertebrate animal to a human, and in this 'game' one of the theories of how new viruses end up infecting humans, when they had previously been circulating harmlessly among bats is explained. Deforestation in rain forests, to make way for intensive farming for global demand for cheap food, leads to the bats leaving their home and setting up nearer to humans. They then pass the virus onto other animals who are even closer to humans, such as domestic animals, or those exploited and packed in unnatural environments, such as those in wet markets or the fur trade. These animals are much closer to humans and the virus eventually mutteus and jumps to them. A simplistic explanation of what is a deeply complex problem, at the heart of which seems to be an exploitation of the natural world and its resources to mainly satisfy the greed of consumerist societies.
'Emissaries of Hope and Possibility' is a more lighthearted look at human relationships with animals during this pandemic, where as 'Zoonotic Viral Spillover' has a more urgent and serious message highlighting the possible consequences if we do no act now.
At the end of 2020 these prints were exhibited in 'Class of 2020' exhibition at Surrey Quays shopping centre, organised by artist Rod Kitson. It was open for a couple of weeks before lockdown hit, and at time of writing remains locked behind the shop window at Surrey Quays shopping centre!
Posted by Anna Walsh at 04:39 No comments:

I was delighted to take part in Woolwich Contemporary Print Fair again this year - albeit a somewhat different event this year as with so many things! This year was fully online, and you could browse the exhibition virtually through the online portal - almost like being there in person! One of the advantages was that wherever in the world you were, you could still 'visit'.
The pieces I had selected this year were from a series of handcoloured screen prints called 'Disrupters', which I created earlier this year. They were inspired by an article I read about an unusual zebra foal that had been spotted (no pun intended!), which was spotty rather than stripey, probably due to a genetic mutation. It was so beautiful and unaware of its uniqueness, I was compelled to look into other animals that we assume will look a particular way, and when they don't, are utterly mesmerising. These animals are disrupting the normal genetic pattern.
Most new mutations reduce the fitness of their carriers, that is, they are deleterious and will be selected against, so that the vast majority of them will eventually be removed from the population. In rare cases, the mutation is advantageous and is positively selected. Without mutation, which introduces new variation into the population, there can be no selection. I see these animals as pioneers, trying out something new to see if it will succeed. Everything is at stake, life or death. A new 'look' could save its species, or, more likely, end with it.
The zebra foal with spots instead of stripes stands out in the crowd, but it is oblivious to its unusual look. Sadly it is likely it will not live beyond its youth, the tried and tested stripy formula of its counterparts as yet creates the strongest herd. Pseudo melanistic tiger - Pseudo-melanism, or abundism, is a variant of pigmentation, characterised by enlarged stripes in the tiger, making it appear darker. The Quinling pandas are a subspecies of the Giant panda. They are found in the Quinling mountains and differ by its smaller skull, light and brown fur and eye spots being under the lower lid rather than around the eyes. The King Cheetah appears to be coming a more common sight (even having its own name to distinguish it from its more spotty usual relatives), a possible explanation being its unusual stripes help it hide better in darker areas. Most of these mutations are thought to be a result of inbreeding.
As populations shrink, and the genetic pool with them, there are less and less opportunities to try out something new, and save themselves from disappearing forever. Hail these pioneers in their last chance saloon.
Black Out Line Screen Printed onto Hahnemuhle 300gsm Etching Paper, Then Hand Coloured with water colours. Each print is 39 x 49 cms, and is a limited edition of 8. 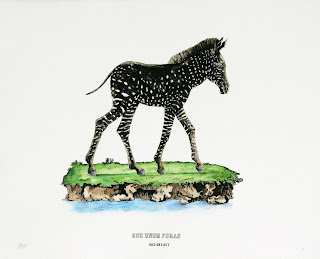 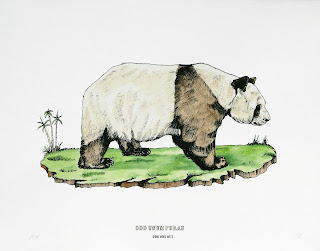 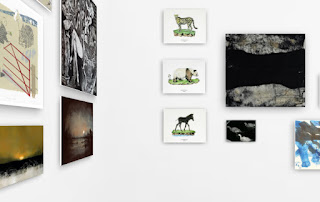 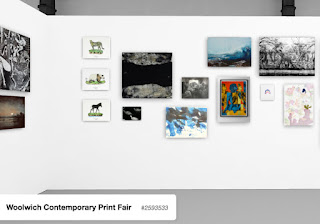 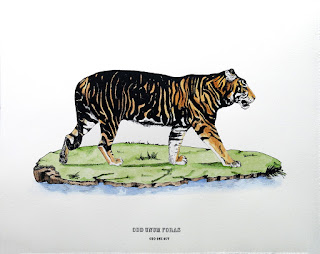 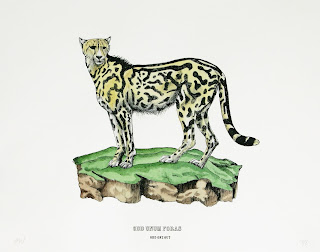 A little project during lock-down I entered was The Trafalgar Way postcard competition. The idea was to create a postcard of a scene along the Trafalgar Way route, which runs from Falmouth in Cornwall to The Admiralty in Whitehall, London (the journey of the naval messenger who brought home the news from The Battle of Trafalgar in 1805).

The pelicans of St. James's Park are a popular tourist attraction, the type of thing a tourist may buy a postcard of, as an unexpected oasis in the centre of busy London. St. James's Park is a stones throw from the Trafalgar way route, and in the distance you can see the lake, then Horse Guards and I think the Old Admiralty buildings along Whitehall, where the final delivery was made. The style of the postcard also echoes the 1805 era.

The closing date of the competition was originally in September, but as with many things has been extended until April next year. However, in recognition of those entries already submitted a little halfway home competition was held, and my piece was one of three selected for a prize!